In 2007, my colleagues Harris Berman, M.D., Dean of the Tufts University School of Medicine in Boston, Massachusetts, Judi Donnelly, and I worked with the board and staff of the leading hospital in Latin America, Hospital Israelita Albert Einstein in the Morumbi neighborhood of São Paulo, to develop a new strategic plan.  In the years since then, the hospital leadership has successfully implemented many of the recommendations, including creating a strategically located network of outpatient health centers.  Representatives of the hospital have visited us in Boston since then to meet with leaders of the major Boston teaching hospitals, Beth Israel Deaconess Medical Center, Partners Healthcare System (Brigham & Women’s Hospital and Massachusetts General Hospital), as well as Dana-Farber Cancer Center and the Tufts University School of Medicine.  During the half-year we worked with the hospital we took long walks in São Paulo, visited major sights, sampled several  churrascarias, restaurants that specialize in incredible Brazilian meats,and explored Shopping Morumbi, one of the shopping malls in the city.  After our final presentation to the hospital leadership, we toured Minas Gerais (described below). 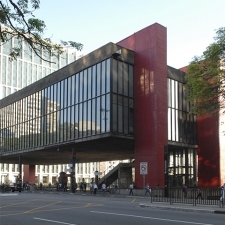 Morumbi Shopping, in Neighborhood of Hospital

After our final presentation to the board and management of Hospital Israelita, we traveled in Minas Gerais, along the Gold Route,  and Rio de Janeiro, UNESCO World Heritage Site.  Below are the highlights of our itinerary: Ipanema, Rio de Janeiro (listen to “The Girl from Ipanema,” below

A Favela in Rio de Janeiro