We loved the vitality in the city, and the food was fresh and delicious.  People who had survived two civil wars had joie de vivre that was infectious.  We were sad to see the suffering caused by the recent Ebola epidemic but proud to see that the country has recovered from yet another challenge.

In 2009 Abt Associates hired me to develop a strategic plan for JFK Hospital, a distinguished tertiary hospital in Monrovia, Liberia, under the auspices of USAID.  The hospital was founded in 1991 with support from the U.S. government and had suffered through the turmoil of two civil wars.  When my colleague Judi Donnelly and I arrived at the hospital, we were impressed with the dedicated people working there, doctors and nurses in particular.  We worked with a talented planning group, including Jennie Bernard, President Ellen Johnson Sirleaf’s sister, Walter T. Gwenigale, M.D., then Minister of Health and Social Welfare, and Christopher McDermott, USAID.  S. Brisbane, M.D., Interim Chief Medical Officer at the time, was one of the first people to die in the recent Ebola epidemic.  We worked closely with James Tomarken, M.D., at the time a Clinton Foundation Senior Fellow assigned to JFK.

The first day we were at the hospital, a few of the enthusiastic young nurses introduced us to a teenage boy covered with acid burns, inflicted on him by intruders to his mother’s home.  This bright, appealing boy had no hope of getting the extensive plastic surgery needed to restore his badly burnt body to normalcy.  JFK and in fact the whole country lack the doctors needed to care for the population, and entire specialties are missing.  A Liberian-born American plastic surgeon had started to treat this boy but had to return home to the U.S. to be with his family.  The fact that we live in Boston turned out to be fortuitous, and through the perseverance of Dr. Tomarken and others this boy was successfully treated, free of charge, at the Shriners Hospital in Boston, enabling him to live a full life.

While in Monrovia, where we stayed at the lovely Cape Hotel, Judi and I enjoyed our friendships with both Liberians and Americans working in Monrovia.  We especially enjoyed our time in the exciting open market, having clothing made by hand out of the beautiful Liberian batiks woven in China. 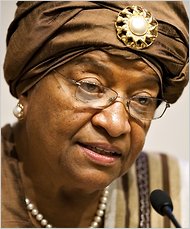